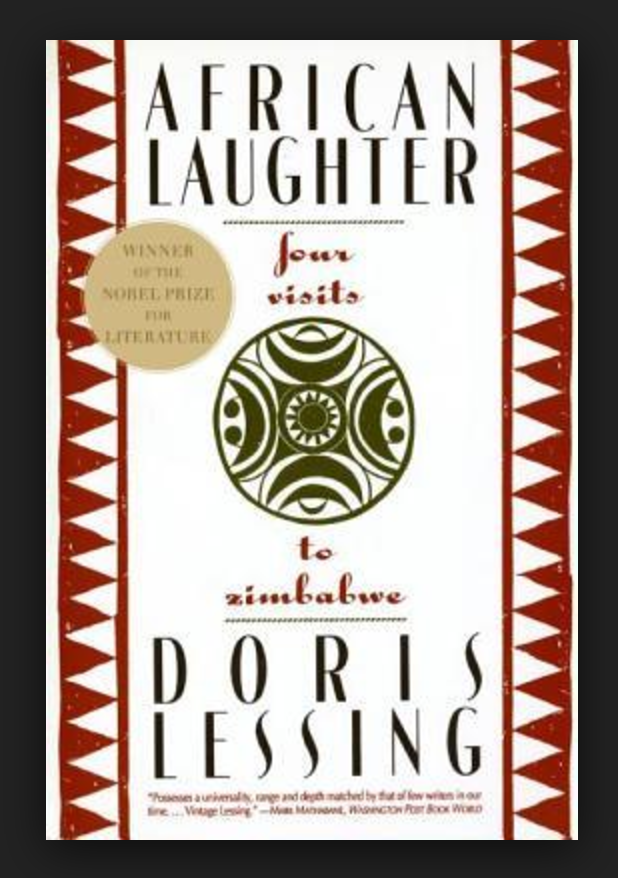 Poignant memoir of an author’s visits to a country that holds her childhood home.

In African Laughter, Doris Lessing’s nostalgia for a country she left behind is palpable. Even though the main focus of the book is to give an account of the author’s visits to Zimbabwe between 1982 and 1992, on four separate occasions, the book is structured to provide readers with the look and feel of the lives of both whites and blacks during the white-dominated Rhodesia and then in the postcolonial era after Zimbabwe gained independence and black-majority rule was established. In this way, readers can walk away with a historical overview of the events that have shaped Zimbabwe to what it is today.

Doris Lessing’s writing style is superb and her story telling compelling. She has a way of bringing the scenes she describes to life. The fact that she is describing events that happened in her life makes the book even more powerful for me. I consider this book a social commentary on the transition from the colonial past of Rhodesia, through the war of liberation to the first twenty or so years of post-colonial Zimbabwe.

Doris Lessing’s journalistic background lends itself well to telling this story as it is full of historic facts narrated in a literary fashion, creating a very informative and highly entertaining read. The issues covered in this book are wide ranging, but the stories are structured in a way that is easy to follow. I also found the subheadings used throughout the chapters in the book very helpful, rather than distracting—as I had imagined when I first got the book. Being a Zimbabwean, I felt like I was catching up on bits of gossip on the history of my country, delivered in neat packages under informative subheadings.

I am curious to find out what Doris Lessing thought of Zimbabwe’s recent history, from 2000 onward. I am actively looking for any of her writings that might share her thoughts on this. I say this because I felt like Doris Lessing was trying too hard not to be critical of the Zimbabwean black government, even at a time when most of the citizens could see through the machinations of those in power and how that was leading to the decline of the country. I felt she was still giving the government the benefit of the doubt when it no longer deserved it.

I highly recommend African Laughter to any readers interested in the history of Zimbabwe. I give the book a solid 5 stars.